We awoke to a cloudless sky at about 6:30 this morning. There was no need for an alarm because of the bright sunlight. And the train less than a mile from the motel.

Being up early for us, we had a leisurely cup of coffee with the owners of the Blue Swallow Motel, Kevin and Nancy. We talked about some of their favorite places on Route 66 and got some ideas for future travel.

Kevin and Nancy moved from Michigan to NM a few years ago and bought the place. They really put their hearts into the business and it shows. We highly recommend it for a clean, attractve look back at what travel was like on the Road of Yesteryear.

After breakfast in Tucumcari we headed out 66, going by Montoya and through Newkirk. At Newkirk we saw two road runners (geococcyx californicus) beside the highway. Road runners were a common sight around Eastland County when I was young. I hadn’t seen any in years. (I threw in the Latin taxonomy to impress my friend Bill Mueller. And yes, Bill, I did have to look it up.)

We went through Cuervo. With a name like that, you would think the place was hopping. It wasn’t.

On down to Santa Rosa. There we saw the Blue Hole, a spring-fed waterhole that is about 80 feet deep. It is often used by SCUBA divers in the area to practice. And in fact, one was there when we drove up. As you can see from the photos, Marian and I donned our own SCUBA gear and jumped right in. Boy it was cold!

Marian with another mermaid at the Blue Hole.

Also in Santa Rosa we saw the railroad bridge over the Pecos River. The bridge was used by director John Ford in the movie The Grapes of Wrath. The view of the bridge is heavily obscured by trees. As I was not able to get a good photo, here is one from the Internet. If you want a better view you can watch TGOW. 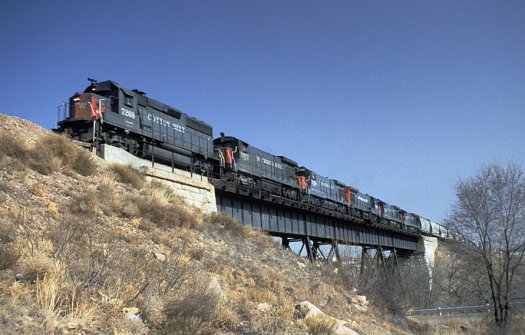 Santa Rosa is the decision spot on whether to take the earliest Route 66 path northwest to Santa Fe or the newer layout west to Albuquerque. Because we have visited Santa Fe before and will do so again, we decided to go straight to Albuquerque. We’ve never driven into there from the east.

For much of the Santa Rosa–Albuquerque route, Interstate 40 overlays Route 66. We stopped at Clines Corner, which is a heavily-advertised “curio” shop on I-40. If you are willing to pay $20 for $4 t-shirts, this is the place for you. Among other attractive merchandise, they had a sales display entitled “Bag of Rocks.” I will let your imagination take charge.

We stopped in Moriarty to find the Sunset Motel, a vintage place to stay on Route 66. (We were there during the day, but this night photo off the internet is much better than the photo I took.)  The motel, a clean a well-maintained place, is owned by Michael Pogue, whose family built the place and has run it ever since. Michael is a cousin of Russell Smith, a high-school classmate of mine.  Michael was traveling, but we had a nice visit with his wife, Debbie. Running a motel is a busy undertaking and as it looked like she was going to put us to work, we decided to hit the road.

Route 66 and I-40 part ways parts just east of Albuquerque. We stayed with the old road and drove over “Dead Man’s Curve.” I offered to sing the lyrics of the Jan and Dean song, but Marian told me I didn’t have to. (The song was about another Dead Man’s Curve anyway.)

From there we drove on into Albuquerque and got something to drink at the Route 66 Diner, located on its namesake thoroughfare. (Route 66 is named Central in Albuquerque.) 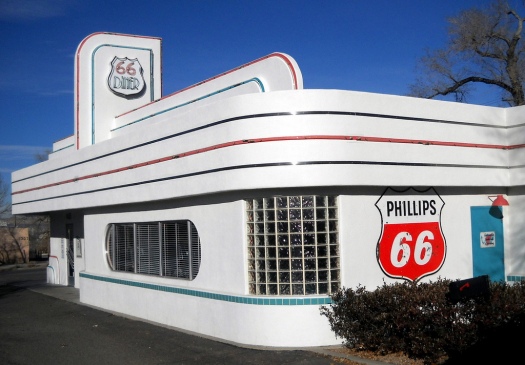 Originally the Diner was a Phillips 66 Station. Curved corners, black-and-white checked tile. The place looks great, the menu is varied enough, the service is great, and the food was outstanding diner food.  We recommend it.

From there we drove along Central into downtown and saw the KiMo, a theater built in 1927 with seriously over-the-top Rococo architecture. The sun was settiing and the theater was in half-sun, half-shade, so I couldn’t take a good photo. Here is one from online. The theater is very pretty; the colors are vibrant. It is very close to the federal courthouse and the street life around the area appears to be thriving.  Finally we had it for the day and got a hotel in Albuquerque.

One issue, just last week we jumped time zones AND we went off daylight savings time. That means that what felt like 6 PM last Saturday is now 4 PM on our clocks. We are having some difficulties adjusting our internal clocks.

Tomorrow we keep heading west. Probably will make Arizona. Only 891 miles left. Whatever will we do when we hit the ocean?