After lunch we headed to Turckheim and Colmar, two cities in Alsace-Lorraine.  Alsace-Lorraine is a region of about 5,000 square miles located on the northeast shoulder of France, near its border with Germany.  Its population today is about 70,000.  Alsace-Lorraine’s sunny and dry microclimate (caused by nearby mountains to the west) makes it ideal for producing the famous white wines for which the region is known.

Alsace and Lorraine had been parts of France since the 17th and 18th Centuries.  After the Franco-Prussian War, in 1871 the German Empire annexed most of the region and named it Alsace-Lorraine.  The area came back under French control after WWI.  Germany took it over again when it invaded France in WWII.

In the winter of 1945, the Allied armies succeeded in forcing Germany out of Upper Alsace and Lorraine, but could not clear Central Alsace.  This created what is known as the Colmar Pocket, a bulge in the Allied line that threatened the Allies’ existing gains.  (This is not the Battle of the Bulge, which took place further north.)  The Colmar Pocket became the site of a significant struggle during the freezing months of December 1944-February 1945.  During those three months,  U.S. forces fought alongside the French Army to clear German forces from the Colmar Pocket.

We started at Turckheim, a small town (then and now) that was mostly destroyed during WWII.  It is now rebuilt along the lines of its pre-WWII condition.  We exited the bus and walked through the city wall along a cobblestone street.

After a few blocks we came to the Combat Memorial Museum, which contains artifacts showing the events and conditions impacting the struggle for the Colmar Pocket.

Plaque commemorating the 50th Anniversary of the Comar Pocket campaign.

Helmet from the 38th Texas Division, which was involved in heavy fighting in the Colmar Pocket.

The museum contains photos, uniforms, weapons, and personal gear from both armies, including military rations and medical supplies used at that time.  The equipment and the faces in the photos provide a sobering reminder of what war is like and by whom it is fought.

Flag made by Frenchwoman from scraps of German flags. She wanted to have an American Flag ready for when the Allies arrived.

After leaving the museum, we drove through the vineyards to a hill.  During the drive our guide spoke at length of the battle, the locations and objectives of the different army divisions involved, and the gratitude felt by the French for the American soldiers.  She especially talked about the Texas 36th Division (or the Arrowhead Division), which experienced intense fighting and suffered heavy casualties.  I was struck by how many times our guide referred to “the Texans” doing this or being located there.

The hill we came to is Mt. Siglosheim, which was the scene of furious fighting involving the Arrowhead Division.  Located there is a US War Memorial and a French National War Cemetary.

The Memorial and the Cemetary are now located in the middle of a beautiful vineyard.  With permission, we picked and ate a few ripe grapes.

Identity of grapes being grown at Mt. Sigolsheim

As we walked through the area, and the guide pointed out the identity and locations of different troops and the terrain they were trying to take.

After seeing the battle strategy, we headed to Ostheim, which is the first village liberated during the campaign. There we took a refreshment break and looked at the local memorials and architecture.  The memorial is built from the remaining wall of a building that was destroyed during the Colmar campaign. 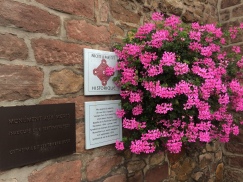 Also here is a photo of something we saw throughout our day today.  The German Stork, which hatches and raises its young here during the summer, is in the prcess of flying to Africa for the winter.  (They fly around the Mediterranean via Spain and Gibraltar, rather than directly across it.) German towns work to attract the stork, providing platforms in trees and on houses for their large nests.  Here is one such nest at Ostheim: 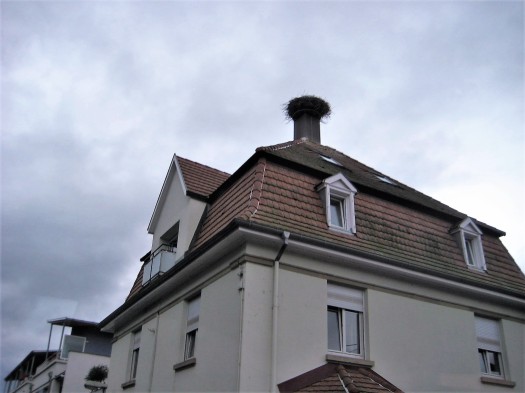 From Ostheim, we went toward the town of Holtzwihr via the Maison Rouge Bridge, which played a significant part of the Battle for the Colmar Pocket.  The bridge, so named from a red house located beside it, spans the Ill River.  The Allied forces sought  to cross the bridge and cut off retreating German forces.  After the American infantry (from the 3d Division) crossed, the bridge collapsed under the weight of the first tank to attempt the crossing.

As a result, the troops were left exposed on the German side of the river, with their supporting armor unable to cross.  German troops turned and counterattacked.  The 3rd Division suffered heavy casualties, both from German fire and from drowning after experiencing hypothermia trying to swim the freezing water to safety.  The remaining American troops dug in to defend their position, giving the army engineers time to get a temporary bridge over the Ill.

During this effort, a young second lieutenant in the 3d Division named Audie Murphy undertook to save his remaining troops from German attack outside the town of Holtzwihr.   As the guide explained, during the course of covering his soldiers’ retreat, Murphy climbed into a burning anti-tank weapon and used its 50 caliber machine gun to kill a number of German soldiers.  After he ran out of ammunition, he followed his soldiers, only then realizing he had been wounded.  On the next day, despite his wounds, he planned an executed a counterattack that helped protect the Ill River until the temporary bridge was erected.

I won’t go into more detail about Murphy, but those details can be found here. As a result of his heroism, Murphy was awarded the Congres sional Medal of Honor.  Ultimately he was the most decorated American soldier of WWII.

We drove over the Masion Rouge Bridge to Holtzwihr.  Past the town, we parked and walked down a quiet dirt road,  Past a grassy field, beyond a line of large poplar trees, is a memorial to Audie Murphy and his fellow soldiers of the 3d Division.

The guide read a prayer at the memorial.  More than a few of us were in tears.  That definitely included me; I had read Murphy’s book, To Hell and Back, when I was a boy.  I was very familiar with Murphy and his actions.  Seeing the locations where Murphy worked to save his men and defeat the enemy was a touching experience.

After we returned to the bus, we continued through Colmar itself, where we found a most surprising piece of art in a traffic circle on the north edge of town.  The 12-meter high statue, made of resin, was sculpted to commemorate the 100th death anniversary of the sculptor Auguste Batholdi, who was born in Colmar.

Today was a long, reflective afternoon.  My postings usually contain a little humor.  I would desperately like to add some here, but the experiences of today just don’t lend themselves to humor.  Seeing where these American soldiers fought and died in a foreign country, in an effort to restore it to freedom from tyranny, is a moving experience.  My observations:  (1) war is deadly, messy business that should not be engaged in lightly; (2) it is fought by ordinary young people (mostly men), who make extraordinary sacrifices in doing extraordinary things under extraordinary circumstances; (3) we owe those young people a huge amount.

Hope you are feeling blessed by God. I am.

One Reply to “The Colmar Pocket (Thursday PM, August 31)”