The day was gray, with some showers expected.  We left the ship in Mannheim and boarded the buses to the medieval city of Heidelberg, which is located about ten miles up the Neckar River from Mannheim.  As we boarded our bus, we all touched the numbered

paddle held by our tour guide (see photo) with our wireless headset receivers. This mated our receivers with her wireless mike so we could hear her comments as we rode along and, later, walked about Heidelberg

I’ve forgotten our guide’s name, but she was unforgettable.  I’ll call her Marne.  Marne was a native of Heidelberg, very German, and very passionate about the city, its history, and the people.  In fact, she was pretty passionate about everything, including everyone keeping up with her.  But she was knowledgeable and entertaining.  She energetically pronounced the theologian’s name as “Loou-ter,” spitting it out with great emphasis on the “ou” and a hard ‘T’ instead of “th”.

Mannheim, on the banks of the Rhine,  is a manufacturing and industrial city.  (As a result, it was heavily damaged by Allied bombing during World War II.) Marne talked about the original steamroller manufactured here, and pointed out a full-size (but as far as I could tell non-working) model of the same.  Marne also pointed out a large (and very working) John Deere factory located in Mannheim.  It manufactures thirty thousand tractors a year.

(Notes:  (1)  I don’t doubt Marne about John Deere, but from a little research I’m not sure a steamroller was ever manufactured in Mannheim, at least not in the early years.  (2)  The name of the musical group “Mannheim Steamroller” is a wordplay on “Mannheim roller,” an 18th century German musical technique, not a steam-powered machine.)

As we prepared to leave the bus we heard Marne in in our headsets:  “s***, s***, s***, s***, s***.”  Then a long silence.  Then Marne asked, “Was the microphone on?” Our laughter confirmed it was.  She laughed as well and explained her microphone had become tangled in the seat belt and when she stood it pulled the mike off her head.  “But that is the only word we use here.  In Germany we never use the “f” word, just “s***.”

Having clarified that international linguistics puzzle, we disembarked our bus and stepped into a narrow street that winds up the mountain to the ruins of Heidelberg Castle.  Of course that is where we started our tour of the city.

More specifically, we started at the visitors’ center of the Heidelberg Castle, a very square, very stone, and very brown building where the rest rooms are located.  Marne gave everyone a few (few!) minutes.  She passed the time by extolling the cleanliness of restrooms and panning the building’s terribly unpleasant (in her view) architecture.  (It looked kind of like the former prison in Strassberg but even more incarcerating.)

Then on to the Castle.   Originally built in the early 13th century, the Heidelberg Castle served as the residence of the Palatinate monarchy through the 18th century. 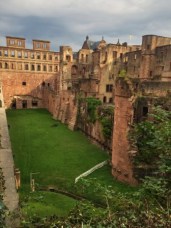 One of its more-famous (but short-termed) rulers was Frederich V.  (There are lots of Frederichs in the Palatinate monarchy.  The photo at the top is one of them, but not the V.)  Frederick V, at age 17, married the 13-year old Elizabeth Stuart of England.  Conceived as a strategic marriage of convenience between the two monarchies, the couple fell quite in love and had numerous offspring.

As a birthday surprise to Elizabeth, in 1615 Frederich V had this Roman-style archway built overnight in her honor. It was (or is) called the  Elisabethentor. 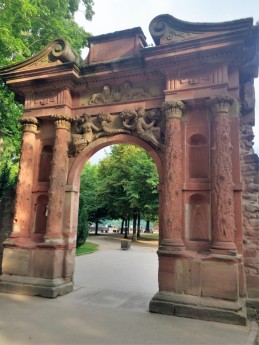 We walked through Elizabeth’s archway  which is decorated with stone ivy and other creatures (see photo), and toward the main entrance, guarded now only by a friendly German groundskeeper.  We walked through the entry port and under the raised portcullis, a reminder that the Castle saw a lot of conflict over the years.

Another reminder of that history is a cannonball (French, according to Marne) half-embedded in the sandstone walls next to the entrance.  Other portions of the Castle were blown up from time to time, rebuilt, and then blown up again.  It’s the way castles are.

One of the Castle’s current attractions is the biggest wine barrel in the world.  It took years to build and have it successfully hold wine.  (For a long time it leaked.)  But wine was how the people paid taxes (at least in part), and having a large barrel made collecting taxes easier.

Near the wine barrel they were playing a video tour of the Castle, which Marne highly recommended for those back home.  The link to the video (in English) on YouTube is here.

Eventually the castle was abandoned by the rulers because, according to Marne, they basically didn’t like the architecture.  No room for large halls with great arched ceilings, the better for holding elaborate dinners and dancing.

As a result, when the place was struck by lightening (which happened with some frequency), there was no one there to quickly control the fire, and large portions of the Castle burned down.

The view of the Altstadt, or Old Town, from the Castle is stunning:

As we left the Castle the intermittent drizzle ended.  We boarded the buses and went down into the Altstadt for a walking tour in beautiful weather.

The city is the home of Germany’s oldest university, Heidelberg University, founded in 1386.  About one-fourth of Heidelberg’s 150,000 +/- population are students at one school or another.  Long a scholastic center, Martin Luther (“Loou-ter”) went to Heidelberg to defend one of his papers.

We walked by the turreted towers of the University; Marne pointed to a building that served as a sort of jail annex, used for incarcerating students for drinking, being loud, etc.  (Juvenile hall for college students.)  We also saw the historical Red Ox tavern, in which the students boasted to their mates about their time in lockup.

Mark Twain spent time in Heidelberg and Mannheim, which resulted in his book “A Tramp Abroad” (1880).  I include an excerpt from that book, in which Twain makes observations about the intricacies of German grammar:

“In German, a young lady has no sex, while a turnip has. Think what overwrought reverence that shows for the turnip, and what callous disrespect for the girl. See how it looks in print—I translate this from a conversation in one of the best of the German Sunday-school books: ‘Gretchen. Wilhelm, where is the turnip? ‘Wilhelm. She has gone to the kitchen. ‘Gretchen. Where is the accomplished and beautiful English maiden? ‘Wilhelm. It has gone to the opera.’”
― Mark Twain, A Tramp Abroad

Twain scholars suggest his boat trips on the Neckar River also triggered his imagination of an epic raft voyage on the Mississippi River, which eventually resulted in the novel “Huckleberry Finn” (1884).  (He wrote “The Adventures of Tom Sawyer” in 1876.)

The central church in Heidelberg is the Church of the Holy Spirit.  It was built as a Protestant church and is one now, but for a while it served both Protestant and Catholic communities.  (This led to some disagreements, especially among the monarchy.)  There is now a very nice and large Catholic church down the street.  Marne (of indeterminate faith) said “I would take you there but it isn’t very important.”

Across from the Church, on the corner, is a shop with four small brass-covered markers amid the cobblestones.  (See photo below.) Called stolperstein (literally, “stumbling blocks”), the markers contain information 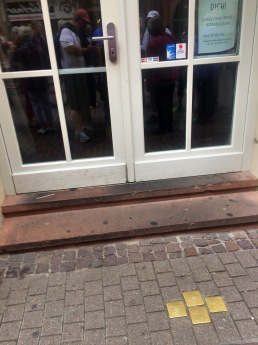 An effort to remember …

about persons who lived or worked at that location and who were victims of Nazi persecution or execution.  The markers are unobtrusive but very visible, and a large number of Germans–including Marne–are proud of Germany’s efforts to remember. (There are a number of stolperstein in Heidelberg, which had a significant Jewish community before World War II.)

We walked along the narrow streets at our own pace, stopping for coffee or to shop in a particular store.  Here a a number of photos (remember to click or hover over the photos without captions for more information):

Standing guard over the City.

Your loyal guard, calling for reinforcements from the Long Island contingent.

Next it was back to the bus and a leisurely ride to our ship.

I mentioned George Patton and Jackson Brown, although Marne did not.  (Perhaps I could get into this tour-guide business myself.) So I end with their photos.  No captions necessary; you can figure this out. 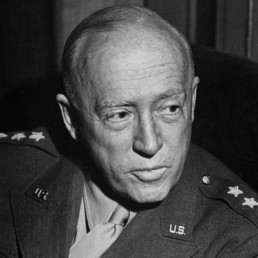