Awoke to a steady rain in Litchfield. We cosidered it God’s encouragement to take our time getting on the Road. Enjoyed a sedate breakfast, reading the local newspaper at the hotel before packing and heading out. 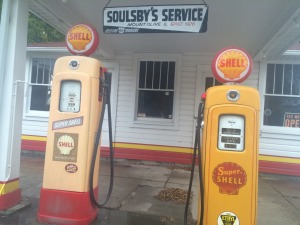 Spent the morning at the Route 66 Museum in Litchfield. The community has done a really nice job showing the history of both the Road and the town. (More than a few of the photos posted are from there.)

The display echoes an observation I made previously. Driving cross-country was an ambitious undertaking in the 1920s and 1930s. Model A’s and Model T’s were not as fast or as dependable as cars today. Moreover, someone passing through didn’t know what to expect by way of the route, places to eat, to sleep, or to gas up or get repairs. You were pretty much on your own. Some of the photos posted are of older photos that capture a little more of what the original travelers experienced. 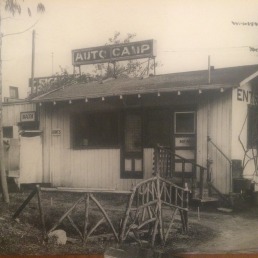 It rained all day, and the overall effect was very relaxing as long as we weren’t on the Interstate. (See below.)

We ate lunch at the Ariston Cafe, which has been operating in Litchfield since 1929. The meal was great, but the best part was a long visit with the Cafe’s owner, Nick Adam, and his wife, Demi. 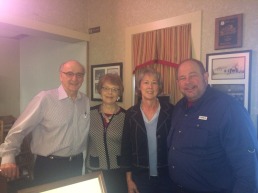 Nick’s father, a Greek immigrant, started the Cafe in 1924. (“Ariston” is Greek for “superior.”) He moved the Cafe from nearby Carlinville to Litchfield in 1929, and to its present location in 1935. Later Route 66 changed routes, leaving motorists driving past the back side of the Cafe. Nick’s dad put new signs on the back, built a new entrance, and kept on serving food.

Nick worked at the cafe as a boy. After he finished college and served in the military, Nick went to law school in Chicago. He left to take a paying job and get married. Later he visited his parents and decided his dad was too old to keep up the Cafe. So he moved home to help out “for a couple of years.” That would be 40+ years ago.

Nick said they get visitors from all over; last year they came from 34 countries. Nick said for some reason he gets a large number of German tourists.

As mentioned above, the location of Route 66 moved over time as various alignments were used. There are three alignments in the Litchfield area and to the south. We drove parts of all of them. The newer routes tend to end up along the service road of the Interstate; Marian and I definitely prefer to be elsewhere. The country roads are much more relaxing, interesting, and thought-provoking.

After lunch we headed south on one of the old alignments toward St Louis.  The high 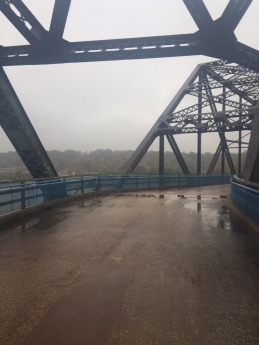 point of the afternoon was walking over the Chain of Rocks Bridge over the Mississippi River, near Granite City, The Bridge is closed to motor traffic, and because of the rain and the off-season, we had the entire thing to ourselves the whole time. We were above where the Missouri joins in, but it’s still a very impressive body of water. And watching the river flow over the rocks shows just how FAST it moves. 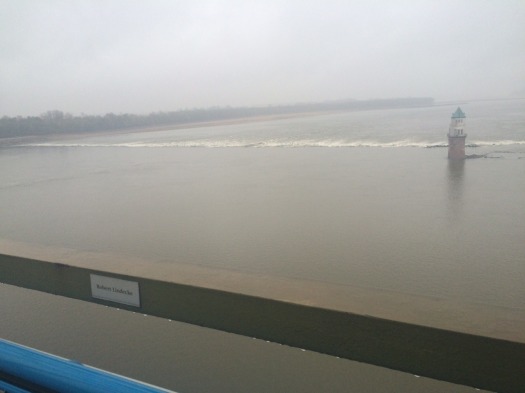 We then drove south and across the McKinley Bridge into St. Louis. Again, we followed one of the old routes through the city. (Some parts of town were a little rough.) It was a very roundabout course, but every time we started to wonder if were lost we saw another Route 66 sign telling us we on the Road.

Southeast of downtown we stopped at two long-time Route 66 businesses. First was the Fresh Donuts Drive In. It was still open at 4:45 p.m.and still serving fresh donuts. We felt it our civic duty to stop in.  Second, a few blocks down the street was Ted Drewes’s Frozen Custard. (One of my law partners told me about it.) Great soft-serve ice cream ordered through the window. There is no place to go in or sit. We ate under the overhang and enjoyed standing up.

After replenishing our blood sugar we were ready to leave St. Louis. We again took one of the old routes. But it was getting dark and still raining, and as we wanted to make a few more miles before stopping we got up on the Intertstate. Bad idea.

Apparently Missourians have no better understanding than Texans when it comes to driving on wet roads. We passed (at very low speeds) five accidents before we decided to call it a night.