Awoke after a short sleep in Sedona. (See weekend’s post.) Can’t say enough about the beauty of Sedona, so here are a few more photos.

And I can’t say enough about where we stayed Sunday night, the Best Western Plus Arroyo Roble Hotel and Creekside Villas. The view was stunning, the bed was comfortable, the breakfast was great. We highly recommend it. (But be sure and ask for the Red Rock view.)

Heading out Monday on the way back to Route 66, we stopped at the bridge over Oak Creek just north of Sedona. Had to buy something for Marian, and get a photo of course.  (See photo at top.)  Then it was long, quiet and winding drive along Oak Creek. Trees overhang the road most of the way along the bottom of the canyon. Surprisingly, there are a number of motels, B&Bs, and homes nestled alongside the road along the river. The road twists back and forth along the river for quite a ways, until it begins its ascent up the other side of the mountain. Then it becomes hairpin-turn after hairpin-turn. In the dark it might be a bit scary, but on a dry, cool, sunny morning with the top down, it was FUN!

We got to Flagstaff, then headed back west. We alternated between I-40 and Route 66 depending on whether there was something we wanted to see or if there was a particularly old roadbed. Near Parks, we exited the freeway and got gas. The store was a combination gas station, post office, general store, feed store, and liquor store. Jan, the lovely lady working there, gave us advice about the roadway ahead.

We got onto Route 66 there and took it as it became a dirt road–a red clay, somewhat wet from prior snowfall, little slick, little muddy, dirt road! We toughed it out and were rewarded by taking the roadway to the city limits of Williams (where we had taken the train to the Grand Canyon last week.) From there we avoided what was described as a rougher dirt road version of Route 66 and got back on I-40. We went into Williams and had lunch at Rod’s Steak House, which is a long-standing eatery there.

Back on the road, we took a long, peaceful stretch of Route 66 and thought about what the travelers in the 1920s and 1930s thought as they passed through this arid section of the country. They had heard of green fields and crops in the California Promised Land, but every time they gained the top of another hill all they had to see was more desert. We drove at a breakneck pace compared to the early travelers–and it is taking us a good while to get from point A to B. Despite the assurance that the Promised Land awaited them, for the Oakies and Arkies fleeing the Dust Bowl (along with more than a few Texans), packing up and heading west on the Mother Road must have been something of a spiritual journey of faith. 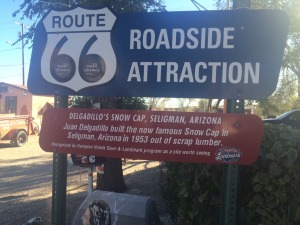 At Seligman we stopped at Delgadillo’s Snow Cap Drive-In, a traditional favorite on Route 66. A few photos and ice cream and jokes from the Delgadillos, we were off on another long stretch of the Old Road heading to Kingman. Leaving Seligman, we drove past another Route 66 standard, the Roadkill Cafe. But as we hadn’t hit anything lately and we had already eaten, we kept on going.

Aside: Between Seligman and Kingman, I had some business to transact. Specifically, I had a conference call I needed to join.  About 20 minutes before the appointed time, I realized I had no cellular service. We drove about 20 minutes at 80 mph through the desert, trying to find a place where I could make a call. About five minutes late, we happened on a store that might have a phone. I came in and asked. Instead, the owner directed me to a space about 12-foot square just outside his door. He had a “repeater” that directed cellular service to that space and, if I was careful, I might be able to make the call.  (I made a bad connection but was able to reschedule the call.)

On into Kingman on Route 66. We got a hotel and small meal for the evening. Tomorrow we will be in California. Here is a photo of one of the traditional Route 66 motels in Kingman. (Not the hotel we are in.)

Lastly, Marian is thinking of her grandmother, Tennessee Bentley, who always quoted Greeley’s “Go West, young man” advice. Pondering that advice from the Road instead of the front porch adds a new dimension to this land and the people who lived here, including those who took Greeley’s advice.