Lucerne the city is located around the shores of Lake Lucerne, in the Swiss canton of Lucerne. (Do you catch a theme here?)  It is overlooked by Mt. Pilatus and Mt. Rigi. (More about Mt. Pilatus in a minute.)

In 1332 the canton of Lucerne and several others formed the original Swiss Confederacy to defeat the existing rulers at the time–the Hapsburgs from Austria.  A few hundred years later Lucerne, which was heavily Catholic, was defeated by the more-Protestant areas of Zurich, Bern, and Basel, reducing its prominent role in the Confederacy.  However, it still a vibrant business and tourist city of about 82,000.

We started the day with a sunny outdoor breakfast at the hotel.  Then a group of us, ten or so, were off on a round-trip to Mt. Pilatus (via ship, cogwheel train, gondola cars, and bus).

After breakfast we met our tour guide, Ursula, who handed out wireless earphones and headed us toward our ship, which was docked a leisurely quarter-mile away.

The day was bright and clear, although the sun had not yet cut through the morning haze over the lake.  The water was smooth and quiet.    We photographed the shoreline, watched children playing on the boat, and listened to Ursula over the earpieces. Highlights of her comments:

Catholic churches have crosses on top, Protestant churches don’t.  Average income is $6,000 per month.*  Unless you have $1 million, don’t start thinking about buying a house. The vast majority of Swiss live in apartments.  There is very little non-working poverty in Switzerland, although the working-poor is a growing problem.   If you are poor someone (?) will subsidize your income, rent, health care, or all of the above, “because they aren’t going to let you die.”  Swiss Lake Lucerne is 700 deep at its max.  Health care is privately purchased by the individuals. The jails in Switzerland are very nice; you can get a solo cell.

(*As Swiss francs are about $1 American each, I won’t bother converting.)

I have no idea if any of that is correct.

After several stops we disembarked at Alpnachstad and boarded the cogwheel train to the peak of Mt. Pilatus.  The source of the Mt. Pilatus’s name is lost to time. It could be named after “pileatus” meaning “cloud-covered.” It is rumored Pontius Pilate is buried there. Whatever it’s named after, it hovers over Lucerne like the dragons with healing powers that lived there in medieval legend.

The electric-powered cogwheel train up Mt. Pilatus, first built over 120 years ago, is the steepest cogwheel train in the world.  It has a gradient of up to 48%.  Here is what that looks like:

During our 30-minute trip to the top, we saw some deer that live on the mountain as well as a large number of hikers.  Ursula remarked hiking to the top takes 4 1/2 hours, with a 3 1/2-hour hike down. (Not for me it does.) After we arrived at the peak, we stepped onto the sunlit deck of one of the hotels there.

We joined a crowd documenting the amazing view. Here I need to include a shout-out to Balon Bradley who, when learning I was coming to Lucerne, convinced me I just had to spend whatever it takes to go on the tour and look at the view from Mt. Pilatus. He was right!

While capturing that view, we noticed two people getting ready to parasail off the mountain top.   They two were prepared, but they weren’t ready.  Suddenly a gust of wind caught the sail, and they were off:

We thought they were going to hit a wall nearby, but they turned out to be not as crazy as I first thought.  In five minutes they were hundreds of feet above us.

We climbed further to get the view of the deck above. Marian also took these:

Someone put a cross up on top of the mountain. Marian took my picture. 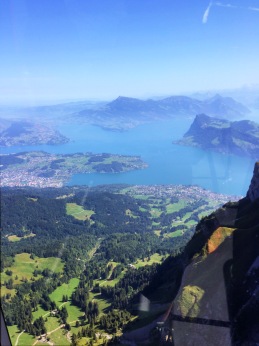 Lake Lucerne from the top of Mt. Pilatus

Me on Mt. Pilatus. One of the mountains behind me is the Jungfrau, which I skiied when I was much younger. (This photo was taken from the same spot as the view of the deck.)

As we were coming back down to the deck, a flugelhorn player started playing a slow version of Amazing Grace.  Two stanzas.  It was spine-tingling and worth the tip.

We ordered a bratwurst sandwich to split on the deck.  Taking my cue from the menu board, I stepped up and confidently ordered “Schwein Bratwurst.”  Our cook looked at me and said, “ok, pork.”  Apparently he is new to the area and uncomfortable with the local language.

After lunch (which I hope was pork bratwurst), we took the gondola ride down. First was the large Dragon gondola that holds about 20-25 people, followed by a smaller, 4-person car. 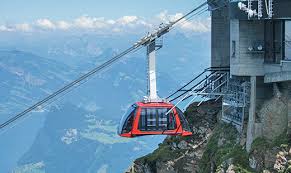 We were off the mountain in 30 minutes.

The afternoon we headed away from Lucerne. Specifically, we drove to Iensiedeln, about an hour away.  In route I visited with some of our fellow-travelers, who will also be going on the Rhine cruise.  I mentioned a group of them are friends, neighbors, and relatives from Long Island.  Today I visited with one of them, a ‘Jim.’  (Including me, there are at least three on the trip.)  He is a retired fireman from Long Island.  Because of his schedule, he has time for more work, which he fills doing construction, snow management (plowing driveways), and what seems like a lot of boating and traveling and having fun.  I said this was going to be a good trip.

On to Einsiedeln.  According to the Catholic Church, The Benedictine Abbey Church there was miraculously consecrated in 947 by Christ himself, assisted by Saints Matthew, Mark, Luke, John, Paul, and Gregory the Great.  (That is an all-star cast.)  The Abbey is huge, it has its own vineyard, and is a major player in the region. It contains a statue of the Black Madonna inside (huge as well0, as well as the gold-covered Our Lady fountain outside.  No pictures allowed inside–it’s an active church.  But here is one from the inside I found online, and two from the outside I took: 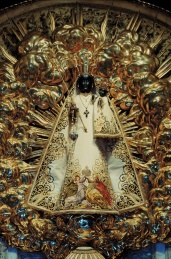 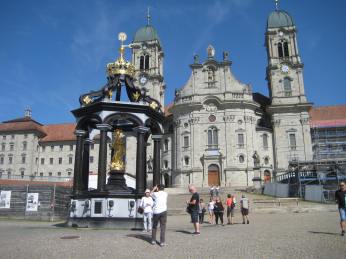 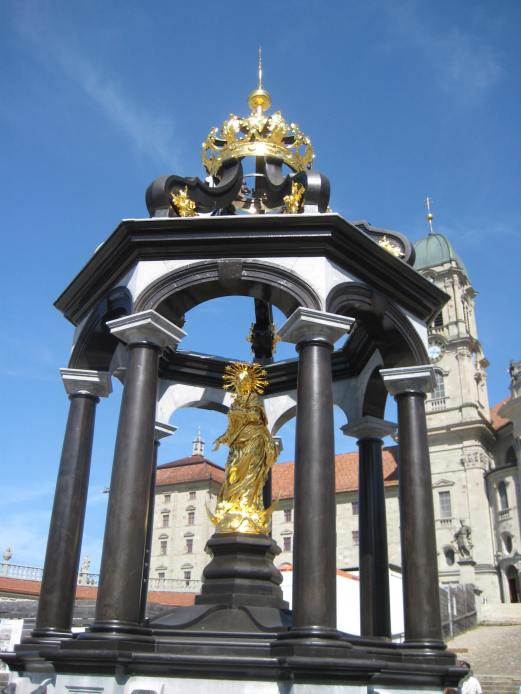 The Our Lady fountain has fourteen places to drink; if you drink from all of them it supposedly has healing powers.

From there we boarded the bus to a nearby dairy farm for a lesson in Swiss agriculture and economics.  The owner is a third-generation head of the operation.  His son, who has completed a three-year apprenticeship in farming, will take over the operation in a few years.  The farm runs 30 head of milk cows (the original Brown Swiss*), and produces what is called “hay milk,” meaning the cattle are fed only fresh grass in the spring-summer and hay in the other months–no silage!

(* As Marian and I both grew up on farms, I swore to her I was not going to take a picture of a cow.  And I didn’t–though many in our group did.  Look one up if you have to.)

It is a very organic operation.  The cows are healthier, produce more milk, and the milk is of premium quality and fetches a higher price.  The milk is used in nearby Einsiedeln (remember the Abbey?) to make cheese.

So we went there and made cheese!  The whole group was involved, but Marian was one of the all-stars: 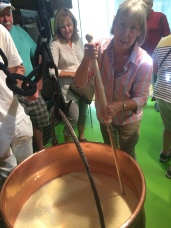 In the photo Marian is performing an activity referred to as “cutting the cheese.” That means she’s cutting the curds, which will leave the whey to be removed. 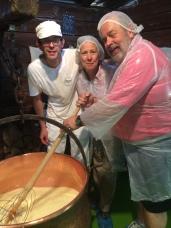 Marian calling on her able but overdressed assistant. 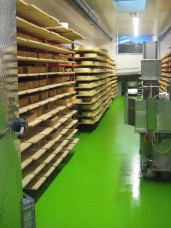 Cheese stays in the curing room until ready to be sold, which is months.

Afterwards we went upstairs and sat down for a great dinner.  Fondue, of course.  Then back to the bus, back to Lucerne, back to the hotel, and (after typing this out), back to bed.

Tomorrow, we finish Lucerne.  Hopefully I will find a cigar before we head to Basel and the Viking Cruise Ship “Idi.”