Cooler, but sunny. We had the top down most of the day. It makes us stand out as tourists, but so what?  One thing I haven’t said much about. Because we are traveling in late October, wherever we go on Route 66 we are usually the ONLY tourists there. I mentioned we were alone at the Chain of Rocks Bridge over the Mississippi, but we were also by ourselves at Hooker Cut and at Devil’s Elbow (except for Dwayne, who isn’t exactly a tourist).

We are having a great time!

We started off in Joplin, taking an older route towards Kansas. On the way out of town, we happened upon the “Praying Hands.” Marian had heard of the sculpture but wasn’t sure of its location.

In Rivertown Kansas we saw the Brush Creek Arch Bridge, along with a sign proclaiming that it is the only remaining “Marsh Arch” bridge on Route 66.  I can understand.  As you can see from the photo, the arches are extremely sturdy. 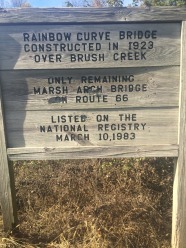 Next stop was in Baxter Springs, Kansas. The visitor’s center is in an old gas station that has been restored to beauty. We visited with the volunteer there and he filled us in on more information about the Rainbow Bridge.  He said it was a popular place for weddings in the area. (As you can see from the bridge photo, no weddings were taking place while we were there.)

We then went to Commerce, Oklahoma. The only thing I knew about Commerce was that it was the childhood home of Mickey Mantle. We went by his house, and then stopped at the Dairy King to get something to drink. There we met Charlie, who told us more about Commerce than we thought could have existed. While we talked, Charlie’s mother was cooking burgers in the kitchen.

Mickey Mantle graduated from high school in Commerce before he was drafted by the Yankees. He played for a nearby farm team until he was moved up in the Yankee organization. Remarkably, he lived here for some years after he made the Yankees, coming back to Commerce to spend the off-seasons.

The Lovely Marian and the Guy She Rides With at Dairy King, Commerce OK

Charlie (the Dairy King) also told us Commerce is a former residence of Bonnie Parker. Bonnie had family in the area and knew all the back roads well. She and Clyde used the area as a hideout between robberies. Charles told us Clyde shot a constable and kidnapped the local sheriff, turning him loose the next day. (Bonnie probably knew him.) Ma Barker’s gang also lived nearby.

And for six months in 1916, Harry Truman lived in Commerce. The hotel he lived in used to stand about 40 yards from Charlie’s Dairy King. Truman had invested in a nearby mine producing zinc and lead. (Note, Mantle’s father was a miner in that area.)

Truman’s investment didn’t work out, so he got into another line of work.

Leaving Charlie in Commerce, we headed toward Miami (here pronounced “My am uh”). There we toured the Coleman Theater, which was built by the owner of some of the lead/zinc mines in the area that turned out well. The theater seats 1200, and has been in continuous use since it opened. It has been restored by the City and is in beautiful shape. 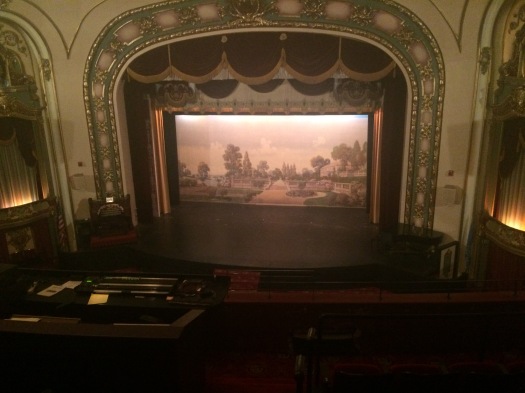 We had heard of the theater from Randall White, a friend of ours in Dallas who is a native of MIAMUH. Mr. Coleman had it built in less than one year and then put it on the vaudeville circuit. He was friends with Bob Hope and Bing Crosby, who vacationed with Coleman and his family. Hope and Crosby sat on the Theater’s board. He also knew other popular entertainers and worked to get them to perform at the theater. Most any big-name entertainer from that era appeared at the Coleman.

Although we were the only people present for a tour, Charles (our guide, not to be confused with Charlie) didn’t hold back on showing us everything.  In fact, we got the royal treatment.

The theater has an original Wurlitzer pipe organ. Charles had Marian and I sit in the auditorium while the organ played the “Phantom of the Opera.” It was magnificent. You could FEEL the air vibrating from the pipes.

Charles also took us through the auditorium, balcony, the stage and backstage, the “Star’s” dressing room (see photos of Marian), the Green Room (and explained how it got its name), and other areas.

The Star’s dressing room. Larger and nicer than the others, and closest to the stage.

The Star in her domain.

In a prop room he volunteered to take a photo of Jim with a stuffed replica of the Phantom of the Opera. He didn’t tell Jim the Phantom was triggered to move when Charles thought it would be funny. Funny for Charles and Marian. Funny for Jim after he caught his breath.  (The blur in the second photo is from Jim’s lightning-fast and agile movement.)

After leaving Miami, we went looking for something I had on my list from the beginning. And we found it! 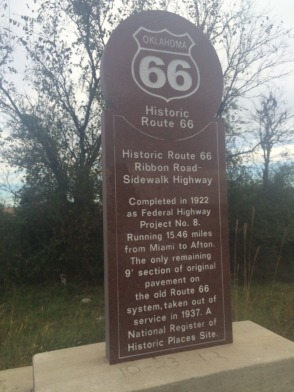 Missouri and NE Oklahoma contain some of the oldest stretches of the original Route 66 roadbed, including a section called the “Old Old Old Route” or “Sidewalk 66.” It is one of the few remaining sections of Route 66 with the original concrete/asphalt exposed. It is nine feet wide. (They have graded outside the road bed so two cars passing can get through.) You can see from the photos it is pretty rough, but you can see the two ribbons of concrete marking the edges of the road.

For residents of Eastland County, TX (my home), some stretches of the Road are about as rough as the dirt road north from Olden heading to my old house. That gives some credence to some of maps I’ve seen of the Bankhead Highway, showing one of the Bankhead routes from Ranger to Eastland coming near my home.  I had always assumed that was an error as the dirt road wasn’t anywhere good enough to be part of a national highway system. Now I’m not sure.

After Miami, we drove through Vinita, which has the largest McDonald’s restaurant. It sits astride Route 44. Vinita is named for the female sculptress whose rendering of Lincoln was used in the Lincoln Memorial.

From there we went to Claremore and went through the Will Rogers Museum, again pretty much by ourselves. Popular in both movies and radio, Rogers (see photo at top)was quite the celebrity in the days before television.  He is a beloved native son of Oklahoma. His passing in an air crash in 1935 was a national event of mourning.

From Claremore we went through Verdigris, Catoosa, and into Tulsa.

Don’t forget to click on the smaller photos above for additional information.